Ah yes, Tanchjim. Tanchjim's claim to fame has always been their single-DD Oxygen IEM. And it's no surprise, really. The Oxygen was followed by the original Hana, an IEM that I did not appreciate very much, and then the equally perplexing Darling. Not bad releases mind you, but IEMs that decidedly fell short in the tuning department and were met with middling reception as a result. This cemented Tanchjim as being something of a maligned Moondrop to my ears instead of the more mature, older brother that the Oxygen initially presented the company to be. Nonetheless, perhaps Tanchjim has recognized this and are aiming to rectify their wrongs with the release of their new, single-DD IEMs: the Tanya ($25) and the Hana 2021 ($180). These IEMs have caught my attention, and I think it's about time I penned down some thoughts in a formal review.

The Tanya was purchased with my own money, and the Hana 2021 was provided on loan via Super*Review and Shenzhen Audio. As usual, what follows are my honest thoughts and opinions to the best of my ability.

All critical listening was done off of an iBasso DX300 and iPhone X with lossless files. The stock cables and tips were used. The Tanya and Hana 2021 are both single dynamic driver IEMs that require a little more juice to drive. That said, I had no trouble running them off of any of my portable sources and there was no hissing.

I won't be going too in-depth here, as I only received the packaging for the Tanya, which I purchased myself. The Tanya's slick packaging and accessories belie its price point; a microfiber baggy to carry the Tanya and several sets of tips are included.

The Tanya is a bullet-style IEM; however, you can choose to wear it looped over the ear like you would a traditional IEM too. Build quality is acceptable; I would not expect flawless build at this price point. A non-detachable cable is included for which there's a microphone option for a few dollars more - this is what I went with. The microphone has an inlay remote which can be used to control playback on iPhone (a very handy feature in my opinion). Expectations for build quality go up considerably as we take a look at the more expensive IEM of the duo. Thankfully, the Hana 2021 delivers. The most obvious change from the original Hana would be the Hana 2021's new gold paint job. This is definitely a pretty blingy IEM - personally, I prefer a more discreet look - but if that's the look you're after...you'd be hard-pressed to find something more classy for the price. The Hana 2021 follows the triangular physique of its predecessors; it's really quite a small IEM in person, and I don't think anyone (yes, even earlets) will have trouble getting this IEM in their ears. That being said, it can be a little too small. This is in the sense that the IEM doesn't always quite lock securely to my ear. But at least for me, it's a small price to pay for one of the rare IEMs that I can lay on my side with comfortably. 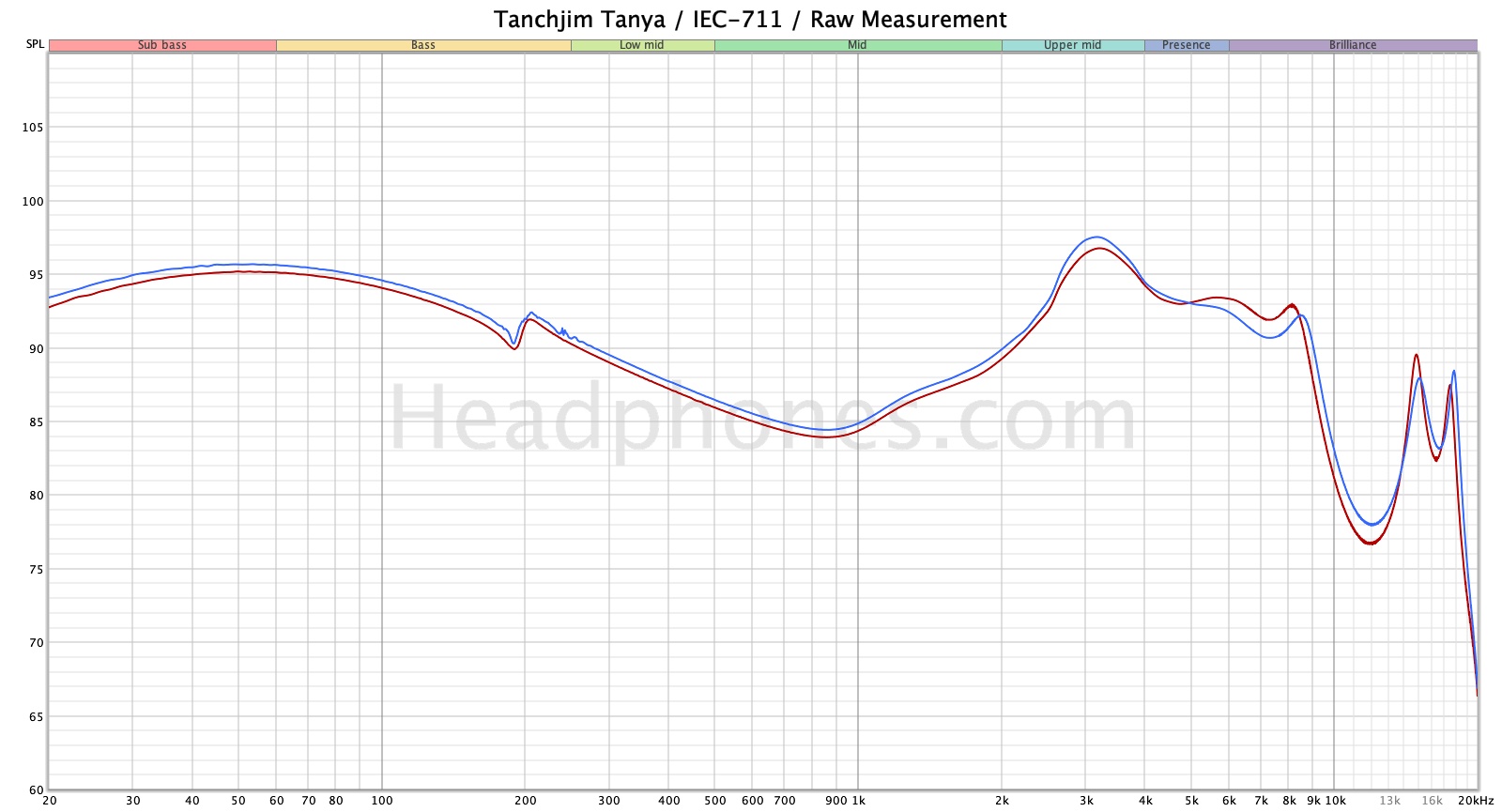 I first heard the Tanya at my friend SuperReview*’s house. It’s not often a budget IEM catches my attention, but this one had me hooked - enough that I had to buy my own pair halfway through my demo session! It certainly didn’t hurt that it was only $25. Now, as for the sound...

The Tanya sports a more V-shaped tuning that is reminiscent of the legendary (and now nearly impossible to find) Sony MH755. Bass on the Tanya is mid-bass oriented, sacrificing some of the juicy sub-bass that characterizes the MH755. Here, I will be blunt: The Tanya is simply not going to stack up in the intangible department for slam or texture against the MH755. But things look up from here. The MH755 has a lot of upper-midrange and lower-treble presence which can make it an overly forward, fatiguing listen. By contrast, the Tanya eschews this characteristic, striking a beautiful balance between the more forward pinna compensation and the sub-1kHz shelf. As a result, while vocals come across slightly recessed in the mix, I don’t find note-weight particularly thin and there’s no hint of edginess to my ears. The Tanya follows this more relaxed trend into the treble; however, it’s refreshing to see Tanchjim hasn’t taken “creative liberties” here, such as the 5kHz peak of death that so many budget IEMs exhibit. A possible weakness after this point would be the lack of extension which lends to a darker, smoother presentation, but this is expected for a $25 IEM.

Temper your expectations in terms of technicalities too. Transient attack is noticeably blunted, and the Tanya’s ability to localize individual instruments is quite limited. That being said, perhaps the most surprising thing about the Tanya would be its staging. It has slightly wider, taller soundstage than most budget IEMs I’ve heard; this is likely attributable to the more open design of the IEM. 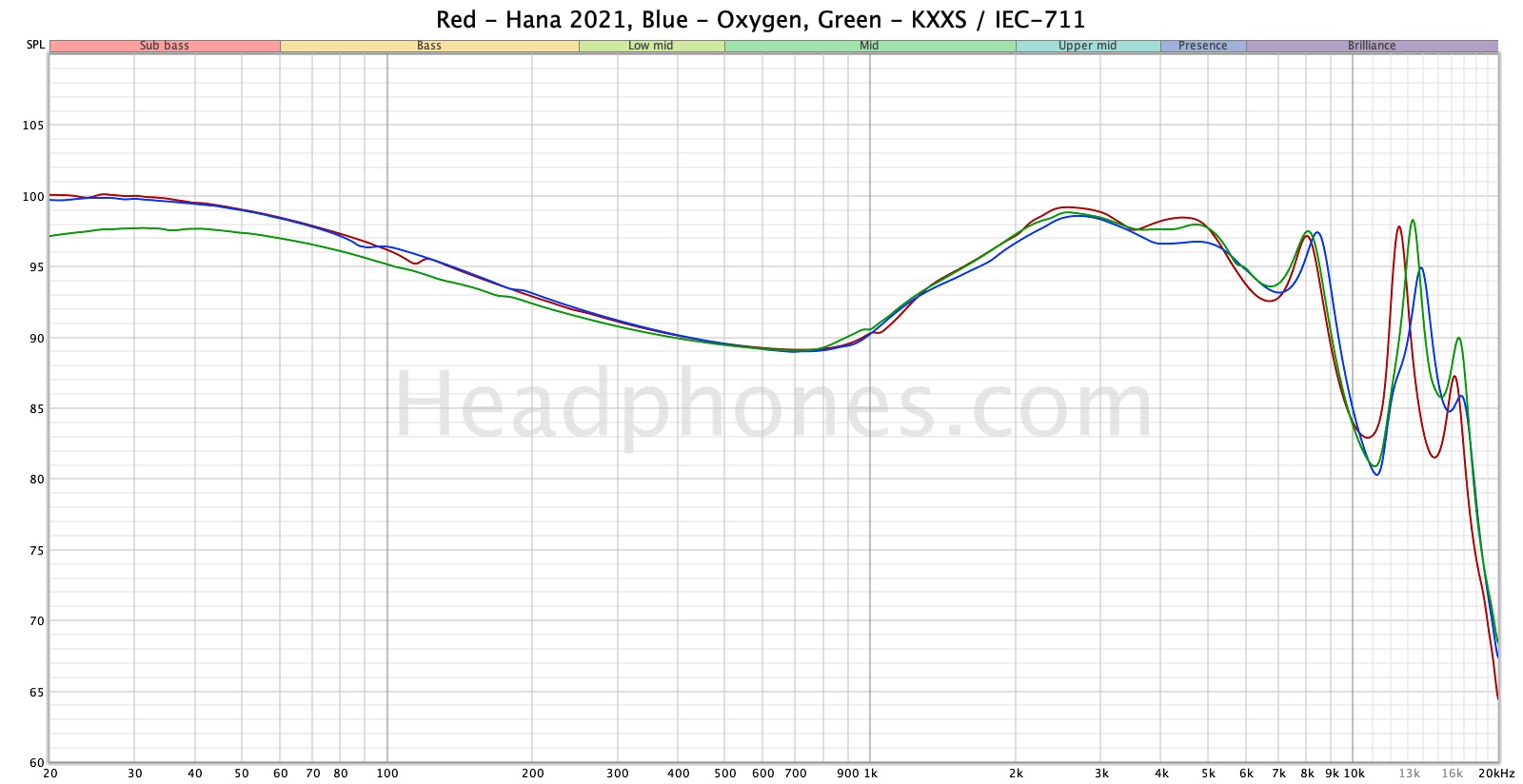 Again, I was not a fan of the original Hana. But the Hana 2021 has my attention. Whereas the original Hana was more bass-light and sported an extremely anemic midrange, the Hana 2021 brings back up the bass and pulls back down the upper-midrange. You effectively have a dead-ringer for the Oxygen, it’s older brother, and the ever-popular Moondrop $100 single-DD IEMs in terms of tuning.

As for what this actually sounds like, this is a warmer, more balanced interpretation of the Harman target. Bass is considerably above neutral with good parts sub-bass and mid-bass. While not the best DD bass I’ve heard, the Hana 2021 slams harder than the KXXS and has a good sense of the organic tactility that I’m looking for. The Hana 2021’s midrange is still upper-midrange leaning; however, the extra warmth in the bass serves to balance the overall note-weight of the IEM and prevent undue shoutiness. Treble is lower-to-mid treble emphasized with a decent amount of incisiveness to percussive attack, certainly more than the graph would suggest compared to the KXXS. The Hana 2021 also does not exhibit the haziness of treble reverb that the KXXS does, presenting a more consistent, extended presence in the air region.

But you might’ve surmised that I’d enjoy the Hana 2021’s tuning; after all, I’ve praised both the Oxygen and the KXXS for their tunings in the past too. So as for what I’m really impressed by, it’s the Hana 2021’s timbre. There’s a common misgiving that “this IEM has a dynamic driver, therefore the timbre is good''. But spoiler alert: not all dynamic drivers are created equal. While the KXXS is one of the better performers in the timbre department, the Hana 2021 is simply a step or two ahead. It has slightly sharper attack transients, yet it maintains slower, smoother decay. Just. So. Pleasant. This is what comes to mind when I’m talking about good DD timbre.

Furthermore, I don’t know how Tanchjim does it, but all of their IEMs are above average in the imaging department. The Hana 2021 has slightly out-of-head imaging with some decent soundstage height, particularly to the direct left and right. Now, we’re talking “for an IEM” and “for the price,” but it’s still pretty impressive. Dynamics are also a tier above any of the Moondrop single DDs with a good sense of vibrancy to the frequency spectrum that, quite frankly, makes the KXXS come off as slightly etched by comparison. If you want to bring in the bogeyman of the sub-$200 bracket, the Etymotic ER2XR, the Hana 2021 also has it beat for these metrics!

Tanchjim has nailed it with both of these IEMs in my opinion. On one hand, the Tanya is poised to be the de-facto recommendation for $25. There’s really nothing that merits consideration now that the Sony MH755 is rapidly exiting the picture; the Tanya is one of the few IEMs that I’d say is “worth the blind buy”. You don’t have much to lose. On the other hand, I was a little more hesitant in my initial evaluation of the Hana 2021. Does it truly stand above the myriad of single DDs in the sub-$200 market, and does it present a worthy upgrade for lovers of Moondrop’s single DD lineup? After spending more time with the Hana 2021 and running A/B comparisons, I have to say: Yes, I think it does. At every turn, it’s a smidge better than its younger brothers from another mother without any drawbacks. Listeners who were holding out for a baby Oxygen also need look no further.

I still need to disclaim that there are a number of reasons why you might not like these two IEMs. But as far as I'm assessing for within the scope of "objectivity" as a reviewer...you'd be hard-pressed to do better.